The “it” she’s referring to here encompasses a couple of things for the young, local organization of all things jazz.

The most immediate and pressing is UNESCO International Jazz Day, which will be marked this Thursday with an abundance of free music and events around the city featuring Calgary’s wealth of musical talent on display.

For JazzYYC, however, how large the event has become in only its second year speaks to a much greater success, which is how far the organization, itself, has come since launching as a website and resource for musicians and music-lovers in only three short years.

“We’re gaining traction and things are starting to take on momentum and a bit of a life of their own,” says Rasmussen.

“There are lots of new opportunities appearing, and it’s really nice to be able to explore them and do something like Jazz Day and get out into more and more areas of the city every year.”

She points to a few impressive stats that underscore the gains JazzYYC has made, including: a jump in membership from 40 when it first began to over 450 now; a volunteer base that has also grown from 50 to 250; and the per-year page views for their website now reaching approximately 100,000.

As for Jazz Day, well, growth there is also impressive and tangible, with the number of other groups partnering with JazzYYC to pull it off hitting 35, making the event a true jazz collaborative, as the organization’s own tag line indicates.

“There’s strength when we work together,” Rasmussen says. “There certainly is.”

There’s also more, period, with some of those partnerships inflating Jazz Day celebrations into almost a full week. Part of that is due to the inclusion of Decidedly Jazz Danceworks current production Ziriguidum under the celebratory umbrella.

But a major reason is because of JazzYYC’s relationship with the Calgary Association for the Development of Music Education (CADME), which also, annually, at this time of year, had its own event that encouraged and facilitated collaborations with professional Canadian players and high school jazz students.

Combining the two was a natural and it now means that the one day stretches to May 4, which also happens to be National Music Monday — another full day of musical celebrations in the city.

“I think about it as CADME provides the horizontal throughout the week and then on Jazz Day we provide the vertical,” Rasmussen says and laughs. “It really makes for a nice mini-festival.”

As for some of the major events taking place throughout the bloated International Jazz Day, those include: a jazz dance party to mark International Dance Day on Wednesday night at the National Music Centre; a Thursday lunch and learn lecture taking place at Arts Commons on how the ideas of improv and collaboration in jazz can work in management and the business world; and the signature event, which is an open house at the Stampede’s Boyce Theatre also on Thursday, which culminates with a concert by Corinne Plomish Trio with Al Muirhead.

Of course, that’s just a drop in the bucket, as there will be a half-dozen club shows and free concerts in such public places as libraries around the city and the Devonian Gardens.

That, Rasmussen says, is an important part of Jazz Day, raising the profile of the music and perhaps, taking it to the uninitiated for an in-person introduction, “because there it is, on the street corner.”

“We wanted to make jazz accessible. Not just in terms of listening accessible but really accessible to Calgarians by being where they live, for free … and welcome the whole family and give people the chance to hear and understand and grow to like this music, love this music,” she says, noting the many different varieties of jazz that there will be to sample.

“There’s going to be some style of jazz that suits anybody.”

She laughs. “This is a jazz smorgasbord. A buffet.”

A great one. So leap in and gorge yourself.

For more information on UNESCO International Jazz Day and a complete list of events go to jazzyyc.com. 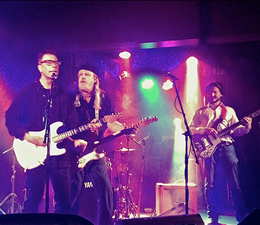