We, the family of Edgar (Eddie) James Beauchamp Morris, his wife Rosemary, children, grandchildren and great- grandchildren wish to celebrate his long and full life. Eddie was born in Rochester, Kent, England on June 20, 1925. He lived 91 years. As a child he delivered meat, by bicycle, from his father's butcher shop. Later as a part of the war effort he became a junior courier. The day after his 18th birthday, Eddie joined the RAF. He was sent to Normandy, arriving on the beaches the day after D-Day. He served in the Mobile Signals Unit until 1945. After returning from the war Eddie studied the saxophone, following his love of jazz music. He practiced regularly in his room above the butcher shop. Eventually, Eddie became a part of the Oscar Rabin Big Band into the early 1950's. During this time, he married Vera Wilcock and had two children, Tony and Catherine. In 1957 Eddie and his family emigrated to Calgary where he joined the (PPCLI) Band. A third child, Debbie, was born in 1958. Vera passed away in 1967. Two years later he met and married Rosemary O'Shea, an international vocalist. They continued to make beautiful music together until his passing. They have two children, Tiffany (deceased) and Angeline. Following his retirement from the army in 1980, Eddie worked at Viscount Bennet High School repairing instruments for Calgary school board. Eddie continued to pursue his love of jazz music and was part of the CFCN production of 'Soft Sounds of Jazz'. He formed the Eddie Morris Big Band and played for 20 years or more at numerous venues in Calgary as well as for international stars such as Bob Hope, Rosemary Clooney and many others. He regularly played large events like the Grandstand, Ice Capades, etc. and was a member of the Saturday pro band. Throughout the years he continued to teach, repair instruments and play music. He was a member of the Calgary Cappy Smart Fireman's Band when they played at Carnegie Hall in New York. Eddie loved to travel and had a great sense of humour enjoying the Goons and Monty Python with his son. Eddie was well loved by his friends and especially his family. We will miss him very much but he would not want us to mourn, he'd say it was 'rubbish' Eddie wanted a party, not a funeral. So, on Saturday, November 19, 2016 you are welcome to drop in at the Morris home, between 2:00 and 6:00 p.m. To share a laugh, a song, a memory of this wonderful man. We hope to see you there. In lieu of flowers, a donation to the Veteran's Association (www.vetscanada.org PO Box 214 53 Queen St Dartmouth, NS B2Y 3Y3) would be welcome. To express condolences, please visit www.mountainviewmemorial.ca 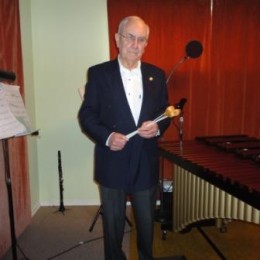