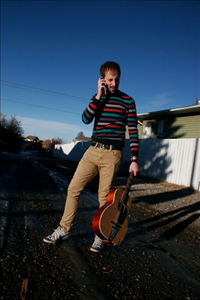 Multi-instrumentalist and music educator Darren Young is quickly establishing himself as a vital part of the Western Canada music scene. He performs frequently as a classical guitarist and double bassist, and is rapidly gaining attention for his work in the bands Diatessaron, Jung People, and The Northwest Passage. Between all of his various projects, Darren has been featured on CBC, Global, CTV, CityTV, Classic Rock Presents Prog, Fireworks Magazine, Calgary Sun, Calgary Herald, FFWD, Beatroute, and on college radio throughout Canada. His busy performing schedule has taken him across Canada and the UK, with select performances in the US and France.


Darren is currently the President of the Classical Guitar Society of Calgary, an organization that brings internationally acclaimed classical guitarists to Calgary for concerts and Masterclasses. He has twice attended the prestigious Aspen Music Festival and School, and holds degrees in performance from the University of Calgary and the University of Toronto.