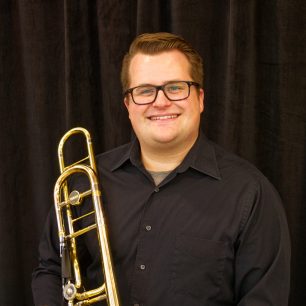 Award-winning Trombonist Dylan Martin has performed extensively on 3 continents, winning the coveted Drum Corps International Performers' Showcase in 2014. Dylan's influences include Joseph Alessi, Alain Trudel, and Christian Lindberg. He is in demand as a jazz and orchestral player on Alto Trombone, Tenor Trombone, and Euphonium.

Under the guidance of noted performer and pedagogue James Scott (Principal Trombone, Calgary Philharmonic), Dylan completed a B.Mus in Trombone performance at the University of Calgary in 2015. He is currently in the final year of his Education Degree at the Werklund School of Education. Dylan is a Brass Instructor with the world-renowned Calgary Stetson Showband.

As a soloist, Dylan was invited to perform the Frigyes Hidas Florida Concert for Tenor and Bass Trombone with the University of Calgary Orchestra in 2014 with Bass Trombonist Brant Melchin. In 2015, Dylan performed the Eric Ewazen Sonata (Concerto No.1) with the University of Calgary Wind ensemble; this concert was recorded, and the performance broadcast on CKUA as part of their "University Concert Hall" series.