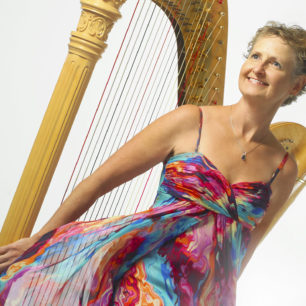 Gianetta Baril has been a professional harpist for 35 years. Much of her career was spent in Europe, concertizing in Germany, France, England, Poland and the Czech Republic consistently receiving glowing praise for her grace, passionate artistry and spectacular technique.

In 2001 she moved to Calgary to resume her Canadian career. Since then she has performed concerti with the Red Deer Symphony and Banff International Summer Festival, as well as a wide variety of solo and chamber music recitals.

Gianetta’s 1987 recording of the Ginastera and Morawetz Concerti with the Edmonton Symphony Orchestra won a Juno Award for the Best Recording of a Canadian Work. Her solo CD “Luminescence” was released to great acclaim in June of 2008.

Gianetta is a highly dedicated and passionate teacher, maintaining active studios at both the University of Calgary and Mount Royal University. Ms. Baril is also Artistic Director of the Instrumental Society of Calgary and Chair of the Focus on Youth for the World Harp Congress, 2011.