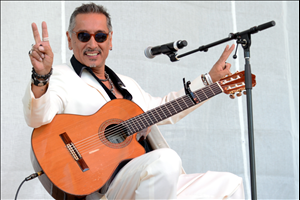 Oscar Lopez's Latin guitar groove has made him a stand-out on the world music scene.

Never afraid to venture into different genres, Lopez easily incorporates jazz, blues, and even pop sensibilities into his music. But one thing remains constant: letting the passion and fire within his soul loose through his fingertips and onto the guitar strings. Lopez has earned two Juno awards and multiple nominations.

Lopez captures the sound and feel of his live performances with an intimate, acoustic set on his latest album, MY DESTINY (Mi Destino). "The music on this album illustrates the power of simplicity. I've been striving to achieve this musical goal for a long time and I am very proud of the results. Every song on this album represents the core of my heart, soul and spirit. MY DESTINY, as are Lopez's live performances, is an invitation to a very personal interaction between him and the audience. "My music is an extension of my soul and life experiences," Lopez explains. "My albums are the product of this internal and external collaboration. I revel in the thrill of watching an album take form."

The Latin feel in his music is one of the most important elements for Lopez. Born in Santiago, Chile, he moved to Canada in 1979 and now calls Calgary home. "My roots are here but all that I am I owe to my mother country; she has made me who I am today".

This global fusion has made Lopez a leader among world-class guitarists. Performing to sold-out audiences across North America and mesmerizing music lovers from across the globe, he was named Instrumentalist of the Year by the Prairie Music Awards. In addition to this and his Juno wins, he has been honoured with 3 Juno nominations, awarded the SOCAN Hagood Hardy Jazz/Instrumental Music Award, and is a two-time recipient of the Hispanic Excellence Award for the achievements as the Hottest Latin Guitarist. ARMANDO'S FIRE, HEAT, and SEDUCTION blazed to the Top 20 of Billboard's "New Age" music chart, receiving widespread critical acclaim.

Oscar Lopez paused to reflect on his astonishing career. He has dazzled the ears and touched the hearts of many with his stunning technique. His soulful energy and fiery intensity has been captured on FLASHBACK, a collection of tunes from many of his top selling albums.