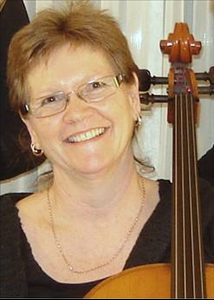 Liz Tremblay is originally from Great Britain where she studied cello (Stefan Popov) and piano (Mary Peppin) at the Guildhall School of Music and Drama.

She worked in Bermuda for many years heading up the Menuhin Foundation of Bermuda, the Pembroke Players (a string quartet) and a Classical Trio performing at two hotels in the islands. Liz was principal cello for many years of the Bermuda Philharmonic and founding member of the Daylesford Sinfonia.

She has performed in concert with such diverse talent as Smokey Robinson, Sir James Galway and Josh Groban.

Since arriving in Canada in 2005 Liz has played with the Kingston Symphony Orchestra. She is also co-founder of The Limestone Trio (cello , 2 violins), Melizaire Trio (cello, piano, violin) and Trio Dolce (cello, oboe and flute). Liz has also performed regularly with the Cantabile choirs, Melos Orchestra and the Kingston Chamber Choir.

She worked as Librarian for the Kingston Symphony Orchestra and has held positions as organist and choir director in Bermuda and Canada as well as running a busy music studio in Kingston.

Liz has performed in many professional and amateur shows over the years playing cello, piano and bass. She worked for a year as repertoire coach for the Musical Theatre Diploma program at St. Lawrence College, Brockville.

In September 2011 Liz performed with the World Civic Orchestra performing at the Alice Tully Hall in New York City.

Liz has recently moved to Calgary and is busy establishing a new studio, Sunmills Studio in the SE where she is offering lessons in music theory, piano and cello including Suzuki cello. She is a member of ARMTA and is looking forward to getting involved in the musical community of Calgary.