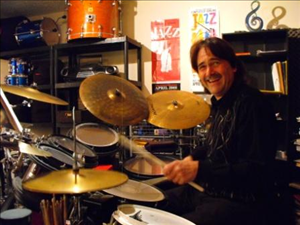 Peter Hurni has earned a reputation in Alberta and internationally as an accomplished drum and percussion performer and teacher.
Peter has been performing since the ‘70s and teaching other aspiring drummers the art of his craft in Alberta since 1995. Peter’s career was launched at the University of the Arts Jazz program in Bern, Switzerland where he graduated in 1980. Bern is also Peter’s home town. After graduating, Peter performed across Europe with his multi-award winning group Birdland where he appeared at the Jazz festivals in Montreux, Bern, Zurich and Luzerne, in Switzerland, Leverkusen, in Germany, Paris, in France, Belgrade and Novi Sad in Serbia, Zagreb in Croatia, and Sarajevo in Bosnia / Herzegovina and taught on several colleges in Switzerland before emigrating to Canada in 1987 to play and teach.
Peter plays Jazz, Fusion, Latin and Funk Music and has played with many different bands over the past three decades of his musical career and has also performed in London, England. In North America, Peter has performed at the jazz festivals in Calgary and Victoria and performed extensively in Los Angeles, Vancouver and throughout Alberta.
To his credit, since 1980, Peter has recorded twelve albums. Living in Canada since 1987, Peter has been actively performing and recording in Calgary, Banff, Canmore, throughout Alberta and B.C. both with his own musical ensembles and projects and as a freelance artist.
Peter teaches drumset and percussion from his studio in Calgary.