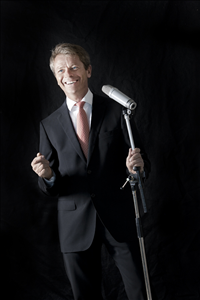 You might say that it was the passing of the world's most famous jazz singer, Frank Sinatra, that sparked the birth of Robert Young's professional music career.

Even as a very young man in his hometown of Winnipeg, Canada, people had remarked on the similarities Rob bore to Sinatra in physical appearance and voice. Not a bad comparison, especially considering Rob's love of the music Sinatra sang.

When, in 1994, Rob and his wife Connie opened the Beat Niq Jazz and Social Club in the basement of their Bistro Piq Niq in Calgary, Canada, Rob instantly found his passion for jazz growing in leaps and bounds.

As a jazz club owner, Rob soon became fast friends with local and touring musicians. And it was the musicians who encouraged Rob to pursue singing seriously, following Sinatra's passing. They suggested also that Rob focus on Sinatra's style and songs.

Like Sinatra, Rob had taught himself to sing, but as a professional, he sought out training from renowned Canadian jazz vocalist Viviane Martin and classical singer and pianist Angela Cuvar. He concentrated on the works of such great American writers as Cole Porter and Duke Ellington, along with the brilliant arrangements of Nelson Riddle. This was the music he most loved to listen to, and he found that it also was the music he most loved to sing.

He began working with several of Calgary's top musicians, and since 1998 has performed with such Canadian jazz notables as Juno award winning saxophonist P.J. Perry, trumpeter Al Muirhead (who, incongruously, is probably best known for his work with country music icon Ian Tyson) and CBC Radio jazz host and vocalist Tim Tamashiro. He has performed throughout western Canada, in configurations ranging from trios to 18-piece big bands. Some of the highlights of his career include an opening performance for Pink Martini at Calgary's Jack Singer Concert Hall, the Calgary and Saskatoon jazz festivals, live appearances on City TV, and a special performance event for Canadian Prime Minister Stephen Harper.

Meanwhile, he has continued to be a popular choice for bookings at night clubs and a host of corporate and private functions. Since selling his bistro and jazz club in 2012, Rob is fully devoting his focus on his performing career

“In The Key of Frank” represents Rob’s first CD project, released in 2009. The recording features Calgary jazz artists who have frequently performed with Rob. In Rob's own words, "It is the ultimate flattery to have the opportunity to perform the music, arrangements and style that is Sinatra."