Hailed as one of Canada’s top lead trumpet players, Jim Murray has been actively playing and teaching in the professional music scene for over 25 years. Guido Basso recently stated about Jim “We have another Arnie in our midst” referring to Arnie Chycoski who was celebrated as one of the top three lead trumpet players on the planet.

He has performed lead trumpet with many musical theatre shows in and around Calgary such as Broadway Touring: “Book of Mormon”, “Wicked”, “Mary Poppins”, “Billy Elliott”, and “Chorus Line” / Theatre Calgary’s: “Crazy for You” , “Mary Poppins”, “Cats”, “Drowsy Chaperone”, and “The Full Monty” / Stage West’s “Spamalot”.

You can also hear Jim play on various recordings, including: Jann Arden’s CD “Uncover Me”, Deanne Matley’s Christmas CD “Get in the Mood”, Ellen Doty’s CD “Live at The Station EP”, Prime Time Big Band’s CD “…For Our Friends” , Heebee-Jeebees’ CD “Heebee-Jeebee TV” and in the Corey Lee film “Legend of a Warrior” . In addition, you can hear Jim play at Ironwood Stage and Grill every 2nd Saturday with Prime Time Big Band. 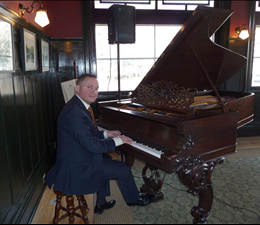