Not What I Meant By ‘Going Viral’ by Alan Willaert, AFM International Vice President from Canada

In 1927, a movie called The Jazz Singer was released. As the first “talkie,” it sounded the death knell for live music work in theatres throughout North America. The phasing out of radio orchestras resulted in a large number of musicians being unemployed. However, 2020 will be infamous in history as a virus now identified as COVID-19 effectively shut down an entire entertainment industry in an extremely sudden and devastating manner. This is not what we hoped for when using the term “going viral.”

On March 13, the Canadian Office (CFM) instituted reduced hours, a rotating but skeletal staff, and proceeded to provide services on a work-from-home basis. On that same March 13, work kicked into overdrive as the true extent of the damage became apparent, and action had to be taken quickly to mitigate the toll taken by a total work stoppage.

A letter from the CFM went out immediately to all levels of government because in the initial Federal response workers not normally eligible for Employment Insurance (EI) were off the radar—meaning 98% of Canadian musicians were excluded. The letter stressed the following points:

Videoconferencing had begun almost immediately with other entertainment unions. CFM was an active participant, and signed on to a joint letter to government, along with the International Alliance of Theatrical Stage Employees (IATSE), the Alliance of Canadian Cinema, Television and Radio Artists (ACTRA), the Directors Guild of Canada (DGC), the Canadian Actors’ Equity Association (CAEA) and others. We also asked Canadian locals to track, as much as possible, the lost work suffered by their respective memberships. While this was clearly a monumental task, we were able to create a combined spreadsheet, updated weekly, in the event the government was insistent upon having backup data as the only justification for compensation.

Michael Murray, executive director of Local 149 (Toronto, ON), was instrumental in the creation and administration of an online petition containing several recommendations to the government for response to the crisis. A joint letter from CFM and Local 149 was sent to Heritage Minister Guilbeault on March 26. In short, the recommendations were:

Rosalyn Dennett, who is an Electronic Media Services Division (EMSD) staff member at the Canadian Office, has been instrumental in posting updates for available subsidies, as well as all things COVID-19, in our social media outlets. In addition, she has created a one-stop centre for all information in the Canadian section of the AFM website, located at www.cfmusicians.org/resources.

The CFM was also asked to participate in a task force, spearheaded by the Canadian Media Producers Association (CMPA). This has proven useful because the employers of the entertainment industry are also shut down, and they have many of the same concerns as the musicians whom they employ. A united voice to government, on behalf of the industry as a whole, is far more likely to be a credible barometer, wherever our objectives are not contrary.

We are also participating in a separate coalition of entertainment unions, specifically IATSE, CAEA, AFM, and Associated Designers of Canada (ADC). Again, as one voice, we are in the process of creating a letter to government to identify long-term issues, and make suggestions for the industry to re-energize, once clearance to return to work is given. These issues are:

In addition to the foregoing, we propose the following additional support initiatives for the federal government’s consideration to assist the arts and culture industry in its health crisis recovery:

As you can see, we continue to be involved in many initiatives in an ongoing effort to ease the stresses imposed on our members because of this worldwide phenomenon. But, make no mistake—musicians would have not been included in the CERB without the persistence of the CFM and our sister unions to ensure that “gig economy” artists would be covered, and that any incidental revenue they had because of students, royalties, or other small amounts of income would not render them ineligible. When I pressed him for answers during the CMPA videoconference, Minister Guilbeault stated emphatically that he had heard our message “loud and clear,” and that adjustments would be made to accommodate our freelance players.

While none of us can predict what the short-term future is of the COVID-19 fiasco, please be aware that your union is doing everything it can, along with our partners, to ensure our members are included in all government subsidies, and to provide a positive transition into the world post-virus. For now, please embrace safe practices and distancing, that you and your families remain safe and healthy. 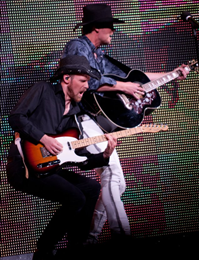